Many food experts say that Morocco has the best cuisine in Africa, perhaps even in the top five of the world. From the narrow streets in the ancient medinas to the Berber villages down south, Morocco is a mysterious and alluring destination and should definitely be on your must visit list. While experiencing this diverse and yet culturally rich country, your senses will be stimulated; while learning, cooking, and tasting the flavorful tagines, salads and patisseries of Morocco.

We gave this trip 5 stars
★★★★★
★★★★★
Ninette & Peter
New York
It was amazing! We covered a lot of territory and Youseff our guided was very knowledgeable about everything! The highlight was going into the Sahara on a camel and see the dunes....incredible!
Read More

This tour includes four cooking classes, each totally different in their styles; from cooking in a traditional dar (house), to cooking over the charcoal in the Berber village. Your classes will be taught by a number of different chefs, each with vast experience in Moroccan cuisine. Each of our teachers speaks fluent English and French, and their establishments are licensed by the government. Included in the 9-Night Trip

This tour includes four cooking classes, each totally different in their styles; from cooking in a traditional dar (house), to cooking over the charcoal in the Berber village. Your classes will be taught by a number of different chefs, each with vast experience in Moroccan cuisine. Each of our teachers speaks fluent English and French, and their establishments are licensed by the government.

In Casablanca your accommations will be in the 4* Hotel Club Val d’Anfa (or similar). The Val d’Anfa enjoys a wonderful location near the city center in and a design between innovation and tradition. The spacious rooms feature en suite baths, mini-bar, flat screen TV, free internet, safe, air conditioning, and more. _(If unavailable an comparable property will be substituted.) —-
In Rabat the Riad Kalaa offers old-world charm with modern conveniences. The 9 bedrooms are individually decorated and include en suite bath, WiFi, minifridges, and safes. Enjoy also the terrace, outdoor pool, courtyard, restaurant, and spa. _(If unavailable a comparable property will be propsed.) 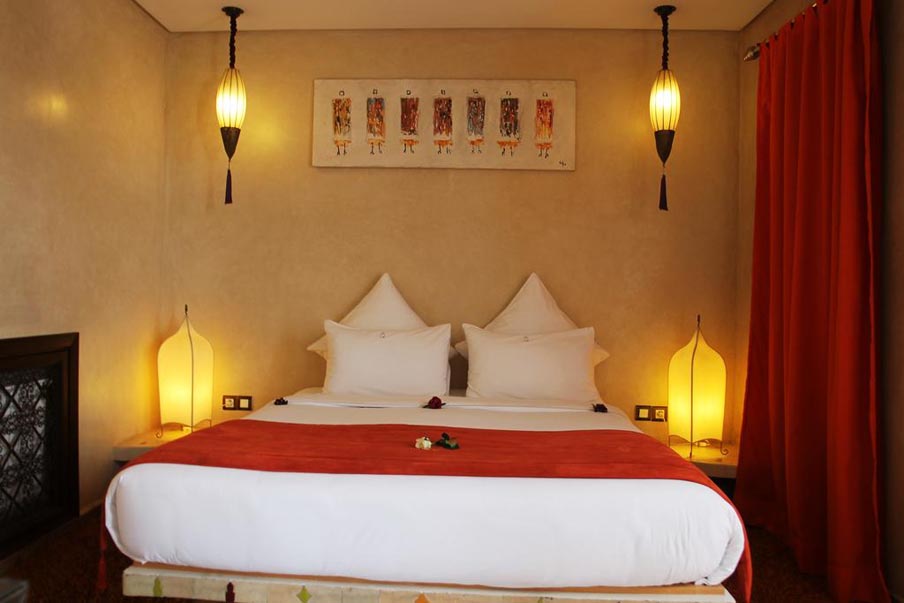 —-
In Marrakech the Riad le Close des Arts lies close to many of the city’s main sites and features 7 warm rooms with classical Moroccan decor. Rooms have WiFi, safes, and en suite baths. Some have canopy beds and sitting areas. There is a traditional tiled courtyard with fountain as well as a rooftop plunge pool. _(If unavailable a comparable property will be proposed.) —-
In Fes stay at the Riad Myra, in the heart of the medina. Built in the early 1900s, the Riad was renovated to form a beautiful, traditional guesthouse maintaining the original architecture and style. There is a large traditional patio, a hammam, a restaurant, lounge, and terrace. —-
In Essaouira your accommodations will be at the Riad Dar l’Ouissa. A traditional riad, the 24 rooms surround an interior courtyard, and the decor is both traditional and elegant. _(If unavailable a comparable property will be substituted.) 9-night Program
US$4130 per person based on double occupancy

Pricing for 1 person on a private trip: please inquire.

Available any week for a minimum of 1 person. The trip is still available during Ramadan, but some adjustments may be made.

The itinerary can also be customized to be shorter or longer.

We gave this trip 5 stars
★★★★★
★★★★★
Ninette & Peter
New York
It was amazing! We covered a lot of territory and Youseff our guided was very knowledgeable about everything! The highlight was going into the Sahara on a camel and see the dunes....incredible!
I gave this trip 4 stars
★★★★★
★★★★★
Mary Dale
Illinois
The last minute scramble related to me having to travel solo was a challenge. I appreciate how it was handled by TIK in the end. I curbed some of my activity -- especially in the evening -- as I was by myself.
No rating given with this review
The trip was great - very well organized, as usual. The riads were fantastic and we are planning a holiday meal for friends featuring tagine and cousous. I've already made several dishes and have started brining my own olives and making preserved lemons.
No rating given with this review
I loved Fes, the riad we stayed in (Riad Jaouhara) and the Cafe Clock cooking class with Souad and the shopping for ingredients in the souk of the medina. Our guide, Hakim Mohammed was outstanding, taking us to see students at a Berber pre-school was a highlight! My daughter and I also both loved the experience of the Berber Cooking village (Imintanout) the best, with its tea contest, bread baking in the clay oven, gathering water from the well by donkey, watching the rug weaving . . . a wonderful experience! Skip Casablanca -- the only good thing about it: the Hassan II Mosque, which was spectacular by the way! In the future, get a flight arriving late afternoon, spend night in hotel, tour mosque 1st thing in the morning and then drive immediately to Fes. I definitely would cancel the cooking class in Essaouira, through the "at risk women" assoc. It was disorganized, dirty and the young woman running the program and the cooking instructor spoke Arabic to each other the entire time, virtually ignoring us! It was boring, there were some technical glitches with the ovens and pastries tasteless. I would add a day in Chefchaouen, if possible. We met someone at our riad who had been there. It looked & sounded breathtaking. The best food of the trip was cooked by the chef at our riad in Marrakesh (Riad Moucharabieh). She made a special chicken Bastilla for us and the "salads" and briwat appetizers were out of this world. I would have LOVED a cooking class from her on how to make that chicken bastilla and pretty much everything else she prepared for us, best of any restaurant or cooking class in Morocco! Finally, I would emphasize the shopping a lot less through the guides in Fes and Marrakesh, if possible, and bring in more history. Definitely have them ask the clients if they like shopping and are in the market for a carpet or leather goods, lamps, mosaics, etc. beforehand, so they don't feel so visitors don't feel cornered to buy something after hours in a carpet shop. Don't know if this is possible, since Morocco doesn't seem to have a lot of plaques posted or written history. Overall, we LOVED our experience! I just was giving the above suggestions only. But I do feel strongly about the Essaouira cooking class being taken out of the mix. I loved hearing Arabic and French spoken, learning about the Muslim faith and being inspired by the 5 times daily call to prayer over the loud speakers throughout the medina in Fes. Meeting such kind, friendly people in the marketplaceÃ¢â‚¬Â¦ our time in Fes was like walking back into the 9th century! Our guide there introduced us to his friend, a coppersmith, hammering away at his work. The coppersmith happened to be a Morocco taekwondo national champion and 2nd degree black belt. My daughter, who just graduated high school, also a black belt, and he had much to talk about, but no common language. After he tried speaking Arabic, then French with her, to no avail, he mentioned "Taegeuk Sam Jang." They both started doing the movements of this poomse( form) together - they'd found their common language. It was pretty cool! Personally, I only stopped waking up at 4:30am for call to prayer a couple weeks after I got back to the states - it became part of me. I will forever remember my wonderful trip to Morocco with my daughter - a perfect way to bond before she goes off to college! Thanks for everything. Susan R., WA
Response from Karen at The International Kitchen: "Thank you so much for your comments and we are so glad you enjoyed your trip! Ã‚Â We appreciate the feedback about the class in Essaouria and we will certainly follow up, as well as your suggestion about shopping."Ã‚Â Cruise on the Mekong River Culinary Adventure on the Croatian Coast

Where is this trip located?
Trip Rating
4.7

Available any dates you choose for a minimum of two people. Please review our complete pricing details.