Pastas abound in Italy, but none quite have the legend that tortellini does. The navel-shaped pasta has an origin story unlike any other. And while tellings of this legend vary, the basics remain the same. That is, when a sixteenth-century innkeeper in the Italian town of Castelfranco Emilia once saw the naked navel of Venus, the goddess of love, he created a tribute to her in the form of a pasta that resembled her belly button. Why was the goddess of love visiting an inn in Italy in the Sixteenth Century? That is a part of the story that food historians usually gloss over.

See a classic recipe for tortellini.

While that’s the way the legend goes, chances are this pasta’s creation was like that of many others and simply a matter of practicality. Sometime around 1570, when the first tortellini recipe was developed, someone figured out the way to keep filling inside of a piece of pasta. They folded the pasta around their fingertip to prevent the meat filling from spilling out during cooking, and voilà! Tortellini!

Take a cooking vacation in Italy and learn to make fresh pasta! 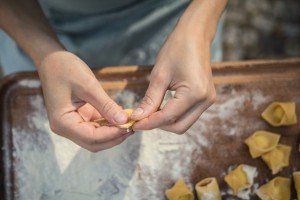 The Home of Tortellini

Whichever origin story you prefer, tortellini holds a special place in people’s hearts and stomachs, in Bologna and Modena, which is apparent during an Emilia Romagna cooking vacation. In fact, the Bolognese consider tortellini its number one gastronomic tradition. As such, the town of Castelfranco Emilia celebrates tortellini every year with a festival to honor the legendary creator of the pasta dish.

Check out all of our culinary vacations and contact us to plan your next trip! How to Serve Tortellini

In general, tortellini always employs an egg pasta, but what you fill it with varies from family to family. Traditionally it is filled with a mixture of prosciutto and parmesan, but some families will pack it with ricotta, others with different cheeses. Still other families prefer beef, and sometimes you’ll find a combination of all of the above. No matter what the filling, the most traditional way to serve tortellini is in a broth.

Chefs often pair tortelloni, the larger version of the pasta, with a butter and sage sauce, or sometimes with cream, peas, and ham. I once had a friend who always ordered tortelloni with a Bolognese sauce, making it a really hearty dish!

You will very often find tortellini in brodo served during holidays such as Christmas. Historically, the costly ingredients involved meant the dish was warranted only when it was time to celebrate.

Try our recipe for delicious and healthy bone broth.

The tortellini-making tradition is a sacred one in Emilia-Romagna, but it’s one the locals love to share! During our cooking vacation “Foodie Tour on the via Emilia: Parma and Bologna,” visitors can learn the technique behind this special dish, along with a few other pasta dishes.

Learn more about stuffed pastas in Italy on a culinary vacation with The International Kitchen! A shorter version of this blog post was originally published January 9, 2014.